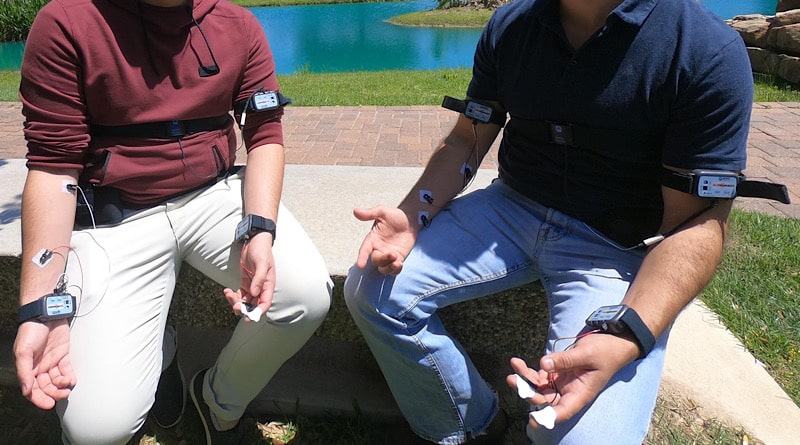 Researchers create an algorithm that tracks brain activity from the wrist

A team of scientists from New York University’s Tandon School of Engineering has created a new algorithm. He is able to monitor brain activity by observing electrical impulses on the skin. This brings them closer to developing a device that can track mental health from the wrist.

Around seven years in development, the software uses information collected by an electrodermal activity sensor (EDA) through the skin. Wearables like Fitbit Sense and Charge 5 come with this kind of technology. They use it to more accurately identify how stressed you are.

An EDA sensor monitors the change in electrical conductance of a person’s skin. This is done in response to trace amounts of sweat secretion. The process is also called galvanic skin response.

As detailed in the journal Computational Biology, researchers at NYU Tandon School of Engineering took the Fitbit-like analysis up a notch. They use an EDA sensor to develop an inference engine that tracks a person’s emotional state. According to a statement from NYU, this is done in “real-time with precision and high scalability.” It appears that this detailed model of the glands provides exceptional insight for inferring brain activity.

The ultimate goal is to create a wearable accessory that can monitor a person’s mental state and give them a boost if something goes wrong. For example, soothing music can be played if the device assesses that you are stressed.

The yet to be completed gadget already has a name. If it ever sees the light of day, it will be called Mindwatch according to the press release. The device has been tested on 26 healthy people and shown that it can reliably decipher brain signals by monitoring EDA at the wrist.

The potential use of such devices goes far beyond simply letting a person know if they are under stress. The technology could be used, for example, to monitor symptoms of neuropathy. Sometimes a complication of diabetes, the disease can cause severe nerve damage, numbness and pain.

In fact, the French company Withings will monitor this condition with its next smart scale. The device was unveiled at CES 2022 in January and should be widely available in a month or two. But their product does not use EDA. Instead, it has a 6-lead ECG that applies a small direct current to the body (through the feet and hands). The resulting information is then used to spit out a daily assessment of sweat gland nerve activity. Currently, these types of assessments can only be performed by neurologists and endocrinologists in an appropriate medical setting.

There are other technologies on the market that claim to be able to track emotional health. Some of these wearables, such as Upmood Watch and Sense Band, have used the crowdfunding model to raise funds for manufacturing. These two come up with their ideas by tracking heart rate, heart rate variability, ECG and more. And let’s not forget the Amazon Halo. This one listens to your tone of voice to understand social and emotional well-being.

the wearer experiences a moment of intense professional stress,

see if the area has the condition.