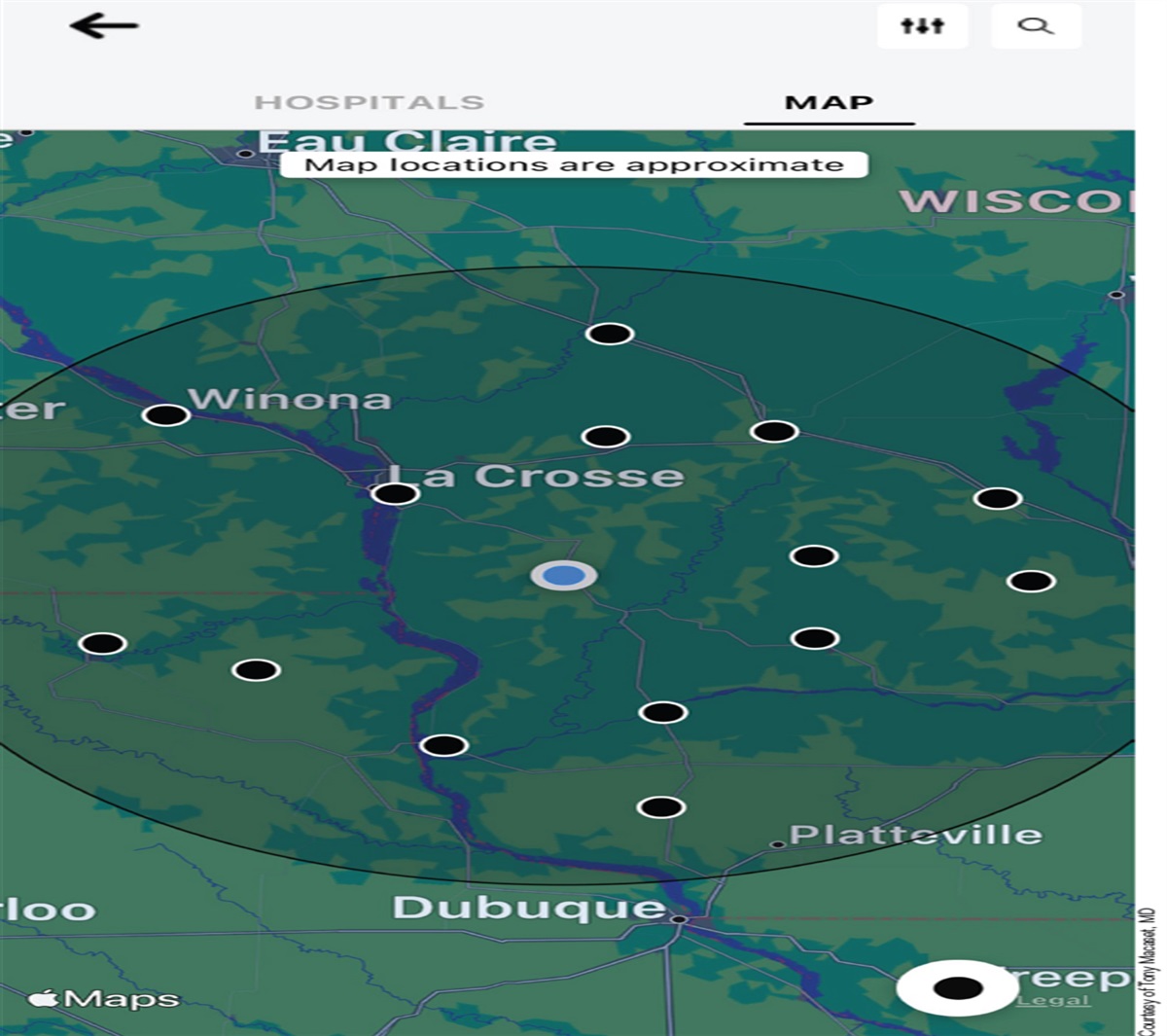 News: No one to take your transfer? Try this app: Emergency Medicine News

Tony Macasaet, MD, sat in his office in the emergency department at Vernon Memorial Hospital in Viroqua, a town of just 4,300 people in southwestern Wisconsin. He could hear a nurse trying to find beds for two critically ill patients who needed advanced care that his 25-bed hospital could not provide.

“First we called our first level hospitals, and they all said no; they are so over capacity,” he said. “It’s not just COVID. They don’t have the staff to take care of the patients. Nurses died, got sick, burned out and left the field for other jobs. They can’t even withstand life-threatening trauma. You can almost hear that fear in the transfer nurse’s voice.

“You wonder who else calls them just to hear a no?” he said. “At one point I timed a nurse calling all the hospitals we could find on Google Maps. It took three hours. The crazy thing is when you Google you can’t really know if you get everyone,” Dr. Macasaet said. “We made a list on a spreadsheet, but realized it was incomplete. Even if you find a bed, you must have transportation from services emergency medical services, which is often unavailable.

That’s when he and his colleagues applied a 21st century solution to the overworked system: they created an app.

If you build it…

It all started with a spreadsheet built by Craig Pierce, PA-C, who works at Vernon Memorial ED. This spreadsheet contained information such as the size and distance from Vernon Memorial for all the nearest hospitals. Elizabeth Gjefle, RN, helped collect the EMS data, and Maria Riley, RN, helped establish a vision for the app called National Transfer Registry, or NTR, for short, which is available on the App Store. Apple and Google Play. (https://apple.co/3hFH5st; https://bit.ly/3sFMoyq.)

“This is a critical access hospital,” said William Kumprey, MD, another Vernon Memorial emergency physician who helped with the app. “Before the pandemic, it was not difficult to get patients to a bigger centre. Sometimes we had trouble finding ambulances, but now we can’t find beds or ambulances. How come there is no national transfer system? The app was developed out of a need for something we should have developed years ago. »

Dr Kumprey said he believes the app will grow as hospitals realize its value, but getting the app into the right hands has been a challenge. Ryan Holzhauer, MD, another ER physician aide, said the past two months have been unprecedented in finding beds and transporting patients. “The idea of ​​the app was to make information available that didn’t exist anywhere else,” he said.

The NTR team contracted a developer in Pakistan to design the app, believing they had little to lose. If they built it and people used it, the transfer problem would be more easily solved. The app could replace hours spent on the phone, time that could be better spent caring for patients.

Dr. Holzhauer said he measured how much time he spent asking hospitals if they had a bed. He would be referred to the transfer nurse, who will ask for the same information as requested at the start of the phone call. “I could do it 15 times for a bed for a patient,” he said. “How many hours a day do doctors spend doing this? How many shifts per nurse? It does not mean anything. With the app, you could save time at each end of the system. »

Eventually, he said, he would like hospitals to start putting their bed status in the app. That way, they could color-code hospital listings to determine if they can take patients.

The number of calls transfer nurses have to deal with must be overwhelming, Dr. Macaset said. “Calls might calm down a bit if we can persuade nurses to swipe right to indicate their ICU bed status.”

Currently, the app can tell a nurse or doctor where they are relative to the home hospital, how many acute care beds they have, and a phone number. It can save time and trouble for the 4,600 acute care hospitals in the United States.

Dr Macaset said they will soon add emergency medical services information to the app. “Interestingly enough, there is no list of inter-facility transfer services,” he said. Each state lists them in a different way, but the NTR team plans to compile a list in the coming months.

They also want to include all 14,600 nursing homes nationwide, he said. “We will have patients in the ER who we cannot send to a hospital bed because three patients are waiting for a nursing home to open,” Dr Macaset said. “In one situation, we called 100 nursing homes looking for a patient bed.” They also plan to include behavioral health facilities to meet other patient needs.

Better communication will help patients, Dr. Holzhauer said. A sick person in the emergency room does not receive the level of care they need and may be stuck there for hours or days. “It would incentivize hospitals to make a bed available,” he said.

Access links in REM reading this on our site: www.EM-News.com.

Comments? Write to us at [email protected].

Ms. SoRellehas been a medical and science writer for over 40 years, formerly at the University of Texas MD Anderson Cancer CenterThe Houston Chronicle, and Baylor College of Medicine. She has received more than 60 awards, including the Texas Human Rights Foundation Award. She contributed to REM For more than 20 years.

Taichung MetroHarbor Hospital in Tungs, Taiwan is the latest to achieve EMRAM Phase 6

How to harness data to create a smarter organization