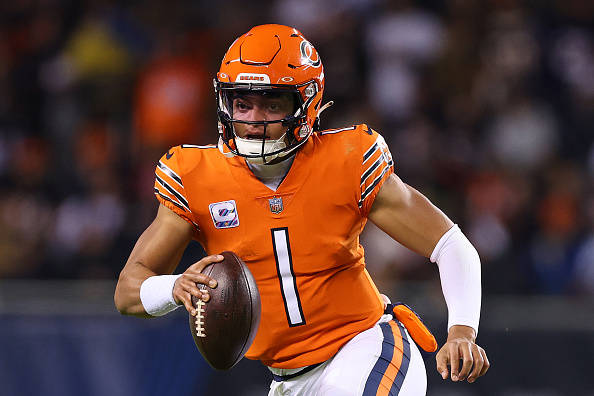 Justin Fields gives his own self-assessment after 6 games

LAKE FOREST — While he certainly wasn’t ranting or raving on the microphone at Soldier Field after the Oct. 13 loss to the Commanders, the Bears quarterback’s frustration was clear.

“I’m tired of being almost there. Tired of being so close. I feel like I’ve heard it for so long now,” Fields said after a 12-7 loss to Washington, where the offense’s last play was inches from the winning score.

It was the most vocal frustration the sophomore quarterback had expressed since joining the team ahead of the 2021 season. Still, Fields insisted Thursday during his pre-Games Patriots press conference on Monday Night Football on how the feeling after a loss was no different that night.

“Just seeing where you can improve, what I can do best as a quarterback, and just trying to improve every day.”

So how does he feel now six weeks into the 2022 season? Fields gave his own self-assessment Thursday.

Fields completes 58.4% of his passes in six games for 869 yards with four touchdowns to five interceptions. He also rushed for 282 yards (5.2 per carry) with a score.

“You just have to work harder,” Fields said. “It’s the only thing I know how to do. Just keep doing it.”