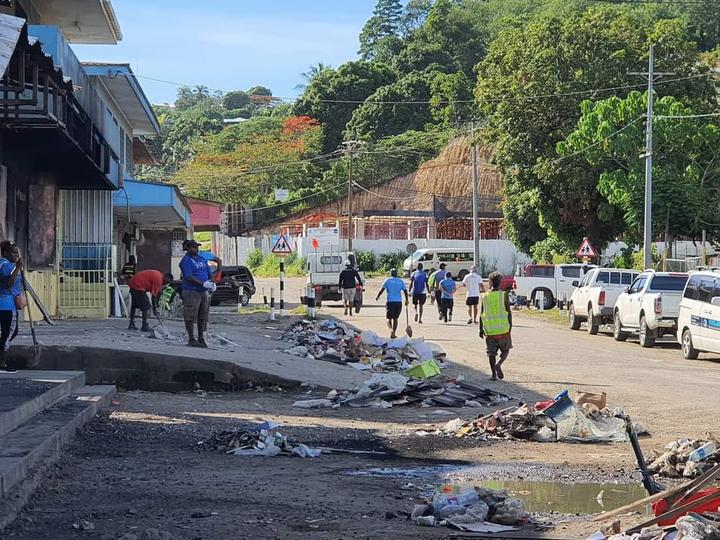 Eleven New Zealand police will be deployed to Solomon Islands tomorrow in response to major unrest in the capital Honiara.

They are the latest element to join a contingent of regional security forces on high alert in Honiara amid political tensions.

New Zealand police will be in the country for up to four weeks, following a request by the Solomons government for regional security assistance.

Their job will be to support local police and Australian Federal Police to reassure and engage the community in Honiara following major riots and looting fueled by protests calling for the impeachment of Prime Minister Manaseeh Sogavare.

A week later, the local community is still taking stock of three days of mob riots that burned buildings and looted shops, decimating the Chinatown district and the eastern part of town.

Yesterday, 15 members of the New Zealand Defense Force flew to the Solomons, and about three dozen more surrendered over the weekend.

About 200 soldiers and police from Australia, Papua New Guinea and Fiji have already been deployed to Honiara since the devastating riots last week.

Regional governments that sent security forces to Honiara said they did not expect the mission to last longer than a month.

While grateful for the help given to regional security, Solomon Islands government lawmakers fear the protesters will cause further unrest, pending the outcome of the looming confidence vote Sogavare is facing in parliament.

“My fear is public opinion after what will happen after Monday’s (confidence) motion, I don’t know what the public’s reaction will be,” said Makira MP William Marau.

“So what happens after Monday will determine how long the troops stay in Solomon Islands.”

The Solomon Islands Central Bank forecasts a 0.6% contraction in the country’s economy following the riots in November.

The bank said the extent of the damage is worse than its initial estimates and the cost is now estimated at $ 66 million, more than double the original estimate of $ 28 million.

Before the destruction in the capital, which saw 63 buildings torched and looted, the country’s economy is expected to grow 0.4% this year.

The retail and wholesale sector was the hardest hit, accounting for over 50% of the damage, with $ 28 million in assets destroyed, further exacerbating an already disrupted supply chain amid the pandemic.

Smoke from the fires billows from buildings in Honiara, Solomon Islands on November 25, 2021, the second day of riots that have left the capital on fire and threatened to overthrow the government of the Pacific nation.
Photo: CHARLEY PIRINGI / AFP)

The bank also expects around 1,000 people to have lost or will be on the verge of losing their jobs due to the unrest.

The riot’s spillover effects on other sectors of the economy such as utilities, communications, transport, education, police and other services are yet to be quantified.

It says the government is expected to lose about 31 percent of its monthly revenue or a net loss of about $ 10 million over the next three months.

Inflation is expected to rise

The CBSI had previously forecast that inflation would rise 3% by the end of the year due to high fuel and food prices. The riots-induced impacts will cause inflation to rise even further to reach 3.7% by the end of 2021, as unexpected shortages of food and tobacco as well as mismatches between supply and demand grow. add to the already high price pressures.

Non-performing loans are also expected to increase as a number of affected companies have acquired loans totaling $ 5.3 million.

Central Bank Governor Dr Luke Forau added that the riot had further exacerbated the already weak and sluggish economy. The trajectory on which the country is heading has been compared to â€œdevelopment in reverseâ€.

In Bihar, a complaints redress system actually solves some problems for Dalits, this book says

Amazon Fire HD 10 is for sale at QVC