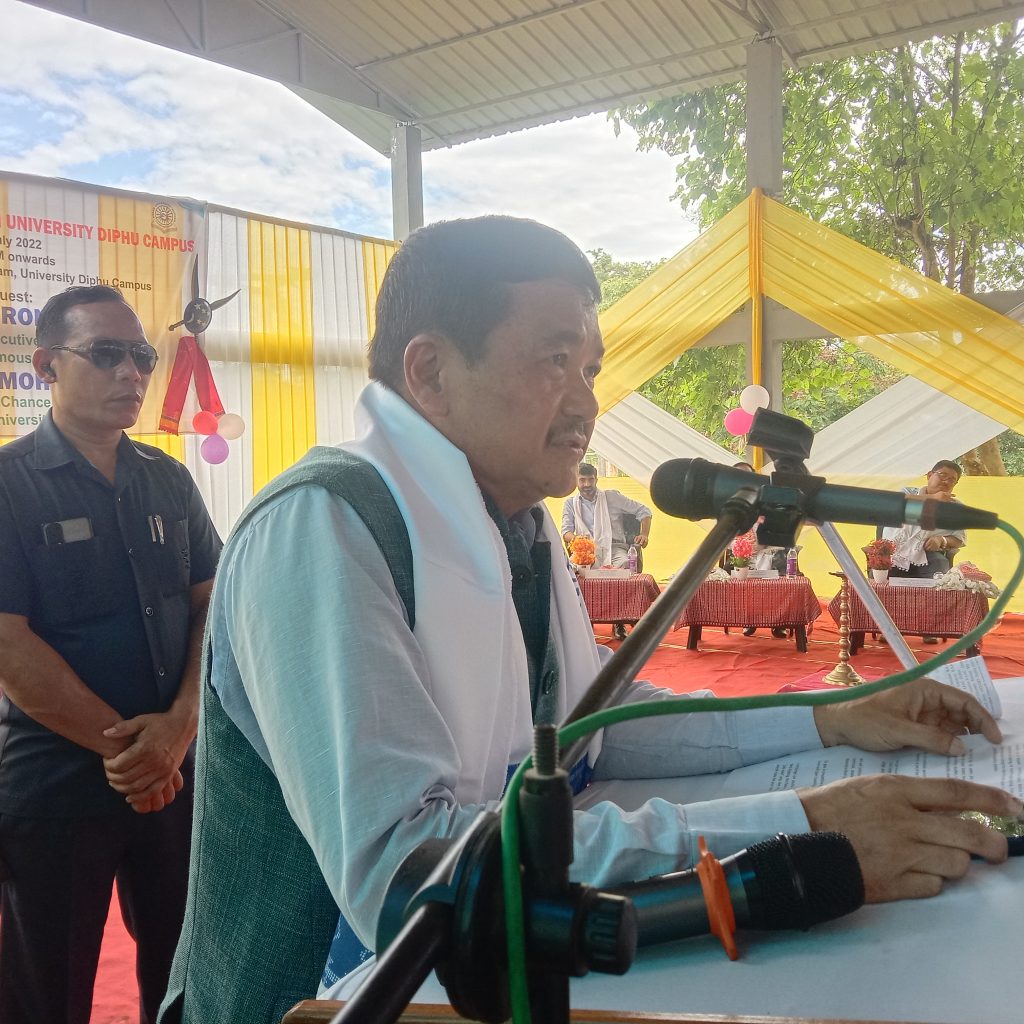 Diphu, July 18 (EMN): The Diphu Campus of the University of Assam (AUDC) celebrated its 16th Foundation Day on Monday at the Open Air Auditorium, AUDC Campus, 8 km from Lumding Road on Monday.

Attending the celebration, Managing Member (MEC) of Karbi Anglong Autonomous Council (KAAC), Tuliram Ronghang, announced the allocation of an additional 3,000 bighas for the expansion of the campus.

The CEM said, “Before the establishment of AUDC, several students who were unhappy due to the financial burden of the family could not continue their higher education. But 15 years ago, when AUDC was established, many students had the opportunity to complete their master’s and do research.

“KAAC is working tirelessly to convert AUDC into a full-fledged university. According to the authority of AUDC, five more new academic departments will be introduced. KAAC has already allocated 450 bighas to AUDC. KAAC took a resolution from the executive committee to allocate an additional 3,000 bighas to the institution.

“KAAC is committed to the development of technical and non-technical education,” he said. The CEM urged students to aim high in life so that every individual can think of contributing to nation building.

AUDC at the University of Assam (AU), Silchar was established in 2007. Initially, AUDC operated at the Hindi Training Center with five departments. AUDC was later moved to the current location at 8 Mile, Lumding Road. It now has 10 departments viz. History, Political Science, Assamese, Anthropology, Life Sciences, Business, Geography, Physics, English and Hindi with one center namely the Center for Tribal Studies.

Currently, AUDC has 1200 students with 43 teaching, 22 non-teaching and 22 casual and data entry operators.

Professor Sivasish Biswas is the Pro Vice-Chancellor of AUDC. The campus authority also said that from 2010 to date, it has awarded 140 scholars with doctoral degrees.

The Vice Chancellor (VC) of the University of Assam, Silchar, Prof. Rajive Mohan Pant joined in the celebration as the chief guest said, “We are 16 years old. AUDC has a beautiful campus full of dreams. AUDC has had a good run over the past 15 years and must move forward with enthusiasm.

“To benefit students in this region, AUDC needs more departments and AU has agreed to introduce 5 more departments to this campus. AUDC should be a model to aspire learning among students This should strengthen the institution and develop skills and holistic learning within campus,” the VC said.

“It is a great moment that CEM was able to inaugurate a 100-bed capacity boys’ hostel named Kharsing Terang Boys Hostel,” he added.

The Committee also submitted a memorandum to VC, University of Assam, Prof. Pant for the introduction of the Departments of Education and Economics, the construction of perimeter walls to protect against encroachments, the upgrading of the Center for Learning in Tribal Studies as an independent and fully functional body. department, introduction of anthropology department to other colleges in Karbi Anglong, to allocate special reservation of jobs (3rd and 4th year) in AUDC to local ST(H) community and regularization of vice chancellor pro .

The universe made me do it…